I can't believe that January is almost over. Apologies that I haven't been blogging much, but it has been a busy time at work, and weekends have been busy too. Although I do have to admit that there have been times when I could have been blogging, but I decided to play Candy Crush Saga instead.

I'm sure you all know what Candy Crush is, but in case there is someone out there who doesn't, it is a "match three puzzle video game" (thanks Wikipedia), which in March 2013 apparently had an average of 46 million users a month. I'm rather late to the party, I've been aware of it for some time but have avoided downloading it as I had heard how addictive it could be. However that all changed a couple of days before Christmas when Ann (mother-in-law) persuaded me to have a go. Thanks Ann! ;)

From that moment I was hooked. Christmas and New Year passed in a blur as every spare moment (and some moments that weren't strictly spare) was spent playing, and this has continued throughout January although at a much reduced level as I have had to work as well (how inconvenient!). I've managed to make reasonable progress, enough to keep me returning anyway. And for those wondering, and I've had at least one email asking, you know who you are ;), yes, in the early days I did pay 69p once or twice so I didn't have to wait for my lives to build up again, but my total spending has been less than £3, and since returning to the UAE I have not spent a penny. 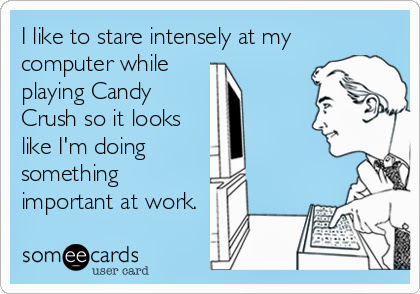 Away from Candy Crush our weekends have settled into a routine during January, usually involving doing something with friends on one day, and spending the next recovering. Two weekends ago we hosted a dinner party, which seemed to be a great success, although the song selection on Spotify did cause one or two tensions as the evening went on. This was due to the men (obviously) choosing proper music, but the ladies objecting to most of our choices as they didn't involve Gary Barlow, or couldn't be danced to.

Anyway the evening finished without major incident, other than one person landing flat on their backside whilst "dancing", and two people ending up with scraped knees due to forgetting about the steps outside our front door as they left. Needless to say the three individuals concerned were all female!

Last weekend some Australian friends on the compound decided to celebrate Australia Day with a "Aussies v Pommies" sporting challenge, involving cricket, netball and basketball. They had rounded up a number of their sporty mates, whereas the plucky English (plus a token Scot, Welshman and French man) were somewhat thrown together. Whilst we put up a brave challenge, unfortunately we were very narrowly (honest) beaten in all of the matches. We shall be better prepared next year, believe me, but it was a great afternoon and evening.

Work continues to be busy but in a good way. I'm splitting my time between Abu Dhabi and Dubai due to my new role, and continue to meet a wide variety of clients and targets. In the last week alone I've met organizations in the following sectors: health, education, dairy, retail, hotels (I knew my degree would come in handy eventually!), financial services, manufacturing, government, and night clubs. I certainly can't complain about the variety, and the important thing is I am really enjoying it.

Yesterday I did a 2.5 hour presentation at the Abu Dhabi Chamber of Commerce, sharing my thoughts on audit committees, a relatively recent concept for the UAE. I wasn't sure whether I was going to be able to fill the time but there were plenty of questions from the audience so in the end it wasn't an issue, indeed I could probably have gone on for another hour! I managed to attract an audience of about 60, and got some really positive feedback, which I am really pleased about.

Jo and the kids are fine, having settled back into their routines. Flossie's reading is really coming on, Archie is enjoying playing touch rugby (despite rarely touching the ball, bless him), and Henry has relaunched his film career (see trailer below). Jo is as busy as ever, out and about exploring new parts of Abu Dhabi amongst many other things, and seems to be emerging as the social hub of the compound, the person who knows everyone, and everyone knows her.

That's all for now, I'll try and post a little more regularly from now on.

Thanks for reading as always. 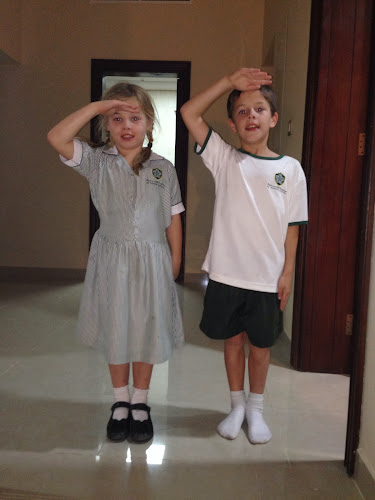 Posted with Blogsy
Posted by Unknown at 21:01

Great to see another blog. Thanks for the filming Henry, took a long time to watch here as the download speed of the WiFi is slow.