There has been a public holiday today to mark the Prophet Mohammed's birthday, so we have had a three day weekend to recover from the first week back at school and work. Everyone seems to have settled back in ok, although we've been spared homework so far so it's been a fairly gentle start.

We've had a good weekend, whilst not too busy. On Friday morning Jo, Archie, Flossie and I headed down to the Corniche for a bike ride. It is about five miles from one end to the other and both Archie and Flossie did really well, Archie completing the full ten mile round trip, and Flossie managing about nine with some encouragement, and strategically timed picnic and ice cream stops. The weather was perfect for being out on our bikes, and there weren't too many people to dodge out of the way of two kids zig zagging their way along. 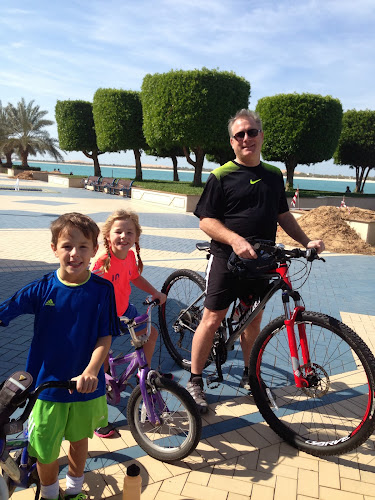 Friday evening saw us at a BBQ at a friend's house on the compound. They are from Canada originally so are expert BBQers, meaning we enjoyed some great food. We staggered home at about 11pm as the kids, and the grown ups, were ready for their beds.

Saturday morning was spent "relaxing" / recovering from the previous evening, then we dragged ourselves out to a local park in the afternoon. Khalifa City A is dotted with some great parks with kids' play equipment, splash zones, football pitches, BBQ facilities, etc. We decided to have a game of football, Archie and Jo versus Flossie and I. However within a couple of minutes a number of other children had decided to join the game. I never quite worked out what the teams were as there were a few language barriers, all I know is that most of the time it felt like everyone else against me. I've no idea what the result was either.

Last night we all, including Henry, went out for tea to Yas Marina. We admired some of the yachts which were moored there, including one that was once owned by Roman Abramovich, until it went to his wife in the divorce settlement, who then sold it for $300 million. Jo would like one for her birthday but I suspect that isn't going to happen!

Before I go I'll leave you with a little Slideshow that Archie made when playing on the iPad.

That's all for now, but I'm hoping to post again in the week, introducing you to my lifelogging project for 2014. Until then, thanks for reading as always.

Posted with Blogsy
Posted by Unknown at 21:02

Great blog as usual! Well done on the bike ride A&F - it looks like a beautiful bike ride to do! We love our bike rides here too! I'm sure it won't be long before you are a dab hand at BBQs - Kimani started with sausages and burgers & has now moved on to lots more culinary delights! Fantastic photo show too - more of those please!! XxxxxxX