I've said it before and I'm sure I'll say it again, but 2014 is flying by. This week has been busy, with our first visitors of 2014, Mark and Kate, with us for three nights. It was lovely to see them and Jo enjoyed showing them around whilst I was working. We've also finally taken the plunge and decided to trust Henry with looking after Archie and Flossie, so we managed to get out for a couple of grown up meals in the evenings as well as spending an hour cycling and walking round the Yas Marina circuit on Tuesday. Kate even managed to fit in an impromptu talk at one of the local schools.

Work itself continues to be varied and busy (and enjoyable). There is a healthy pipeline of new work, and every day brings a new challenge. In just the last week I have been liaising with BDO firms around the world about a bid focused on Abu Dhabi, and it's been great to see just how well the network works at times like these. Tomorrow I have an intern starting for a few months to support me with various projects which will be great as they are things I have been struggling to find the time to progress.

Turning to the weekend, we had a busy day yesterday, heading onto Abu Dhabi Island to watch some of the Red Bull Air Race, and visit the Qasr Al Hosn Festival.

The Red Bull Air Race is an international series of races in which competitors have to navigate an obstacle course (see the strange little cones in the distance in the photo below) in the fastest time. The series started in 2003 and ran every year until 2010, before being cancelled in 2011, 2012 and 2013 due to safety concerns (apparently there were some near misses). Following changes it has started again in 2014, with Abu Dhabi being the venue for the first race of the series.

There was complete traffic chaos so we couldn't get very close to the action. Still it was nice to sit on the beach for a while watching the planes navigate the course, which a couple of them struggled to do without knocking one of the cones down. 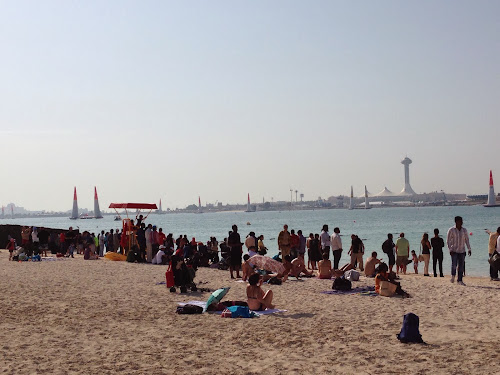 Having spent an hour watching the planes we jumped into a taxi to Qasr Al Hosn to visit the festival. Qasr Al Hosn is the oldest building in Abu Dhabi. It started out in 1761 as a round watchtower defending the only freshwater well on the island, and was expanded to become a small fort in 1793, at which point it became the permanent residence of the ruling sheikh.

It stayed this way until the 1930s when revenue started flowing from the granting of the first oil license, at which point it was expanded. It remained the seat of government until 1966 and is now a heritage site, with the fort currently undergoing extensive renovation. The photo below shows the fort in the 1940s. It is now completely surrounded by modern day Abu Dhabi, showing how much the city has changed in a relatively short period of time. 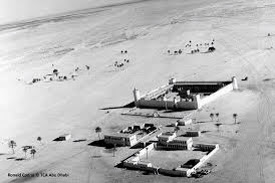 Each year there is a festival at the fort celebrating the history of Abu Dhabi. There are various sections focusing on areas such as the desert, an oasis, Abu Dhabi Island, marine life, and the fort itself. There is also a programme of workshops for adults and children, including palm weaving, kandura dyeing and making fishing nets. Archie and Flossie enjoyed a couple of workshops, including painting an Arabic goblet and making a traditional toy, a hobby horse.

Apart from there being complete bedlam when trying to book onto the workshops, the sessions themselves were very well run, with lots of helpful instructors on hand to help the kids if they were struggling. It was a shame we didn't have longer to do more of the workshops but there is always next year. 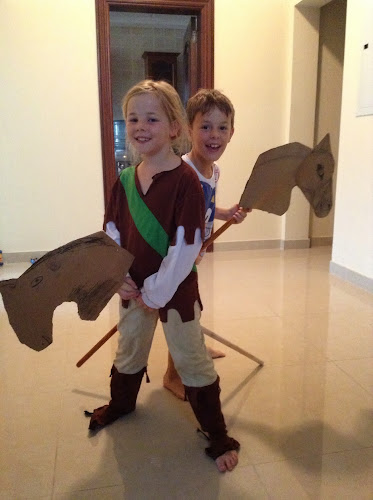 As well as the workshops Archie held a falcon, Flossie petted a hunting dog (Saluki), and they both had a ride on a camel. To round off an enjoyable day we watched the UAE's aerobatics team, Al Forsan, performing to mark the end the first day of the Red Bull Air Race. There was something quite nice about watching the modern day air display taking place over the ancient fort.

After a busy day it was back home where Archie, Flossie and I enjoyed a pizza whilst watching Man of Steel (superman), and Jo went out to a traditional Arabic bridal shower at a house on the compound, about which I'm hoping she'll write a "guest post" soon. 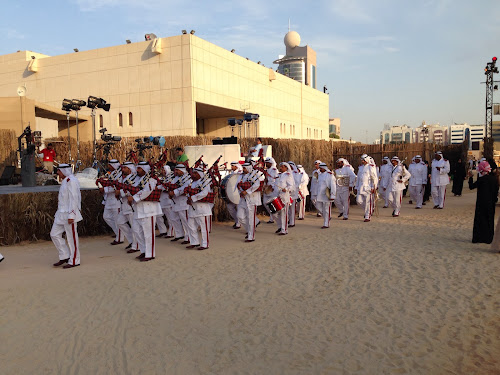 Anyway, almost time for tea so I shall leave it there for now. As always thanks for reading.

Posted with Blogsy
Posted by Unknown at 17:30

Another interesting blog, there always seems to be something of interest for the weekends! Look forward to November.