After a good start, last weekend got too busy for me to do an update on days three and four, and here we are again at another weekend.

In summary days three and four were fantastic. In reality it's easier to follow qualifying and the race on television, but nothing quite beats the sight of the cars, the scream of the engines, and the smell of burning rubber. We all watched at some point over the weekend, and Archie in particular enjoyed himself. It did help that I was able to download an app which had a virtual representation of the track, with dots going round it (in almost real time, maybe 5 seconds delay) representing all the drivers. This meant Archie could watch his favorite driver, Jenson Button, on the app, and look up at the right point to watch him passing us by.

Mind you, Henry was the big winner. His friend's dad is senior in one of the hotel groups here and had a number of "spare" tickets in the main grandstand overlooking the start / finish line. So Henry spent both days in there, with one of the best views on the circuit. I'm not jealous at all!! 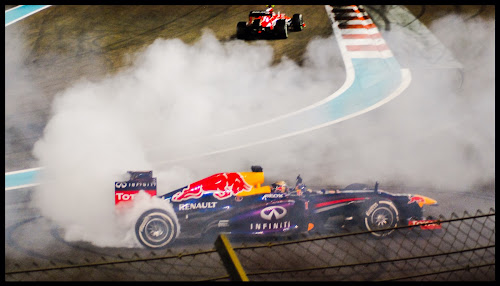 As well as the racing I went to the Muse concert, and Jo, cousin Pete and myself went to see Depeche Mode on the final evening. Both concerts were fantastic, Muse was the better of the two in my opinion, but I was surprised by how much I enjoyed Depeche Mode - they teased us with newer stuff before playing some of the classic hits.

After such a hectic weekend it was hard to drag myself into work on Monday but I just about managed. It's been a busy four days, mainly spent responding to proposal requests which seem to be coming in thick and fast at the moment, often with very short timescales (makes some of deadlines I had at PwC positively relaxed). These timescales can be even more pressured when you have to send the request to a local typing office to be translated from Arabic to English so you know what you are actually bidding for, and then you have to build in time to have the proposal translated from English to Arabic before you submit it.

This weekend is shaping up to be another busy one. Tomorrow morning we are heading to Dubai for a night, Jo and the kids first visit. We have a packed programme, including:

Just looking at that list suggests we are becoming petrol heads doesn't it!? I think we'll have a break from cars for a while after this weekend.

The weather should be fine for all that though. It is definitely getting cooller, indeed the forecast on the radio on the way home from work predicted "a cold weekend, with the temperature unlikely to get above 29 degrees centigrade"!

I'll be back next week to let you know how it all went.

Posted with Blogsy
Posted by Unknown at 20:26