Another weekend gone in a flash, but we had a great time in Dubai.

We drove up on Friday morning and got to our hotel, the Marriott Dubai Harbour, without too much trouble. As expected our room wasn't ready for us, so we dumped our bags and asked the concierge the way to the nearest Metro station. He informed us that as it was Friday, the Metro doesn't start running until 1pm, which hadn't even occurred to us. But it wasn't a problem, as we just had to jump in a taxi instead.

The taxi dropped us off at the Dubai Mall, our centre of operations for the afternoon. The Mall is huge, even by UAE standards. Apparently it is the world's largest mall based on total floor area, and houses approximately 1,200 shops and restaurants. It is so big it even has its own taxi service, consisting of elongated golf buggies (apparently based on Rolls Royce designs), to cart people around.

We grabbed lunch in the Rainforest Cafe, and then headed off to the Burj Khalifa ticket office to exchange our vouchers for tickets for our allocated visit slot later in the afternoon. If you don't book ahead you can struggle to get in.

Our next task was to find some tickets for the Motor Show on Saturday. We found out that they were on sale at the Metro station next to the Mall so headed off in that direction. Foolishly we assumed the station would be very close to the Mall, however it turned out to be almost a kilometer away. Thankfully you can walk (or use moving walkways) all in the way in an air conditioned walkway which opened a few months ago (it really is true that if you want to, you can pretty much stay out of the sun all the time here!). 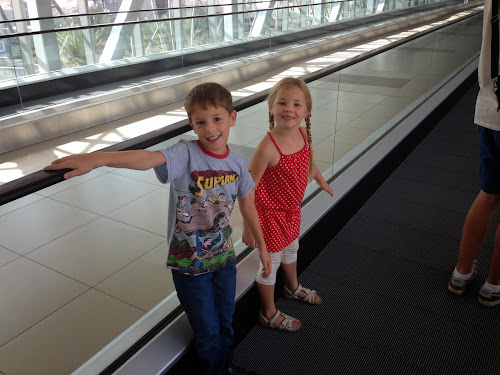 We got our tickets, which left us with an hour to kill before the Grand Car Parade, being held round the streets of Dubai to mark the Motor Show. We realized that the main road outside the Metro station would be a good vantage point, but to kill some time decided to walk back to the Mall to pick up a couple of things.

An hour later, having done the length of the walkway both ways, and getting pretty tired, we were sat next to the busiest road in Dubai waiting for the cars to arrive. The parade was to consist of 500 of the UAE's most expensive cars, estimated to have a combined value of around £100m. 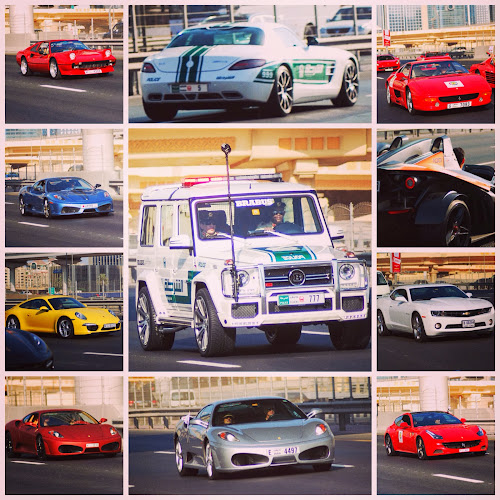 Before too long the cars started passing, led by a number of the super cars which are part of the Dubai Police Force. Health and safety rules were completely absent as the crowds at the side of the road pushed forward to get a better view of cars passing them at at least 50mph. The road started out as five lanes wide but there were barely two passable by the end. 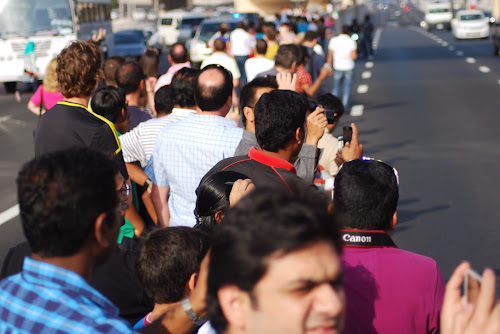 Anyway, we enjoyed seeing the cars, especially Archie who is going through a real car phase at the moment, but before too long it was time to hurry back along the walkway (again!) as our slot to go up the Burj Khalifa was fast approaching.

To be continued in "Weekend in Dubai: Part 2".

Posted with Blogsy
Posted by Unknown at 18:37

As usual, GOSH. What a life you lead! All sounds exciting. Dad